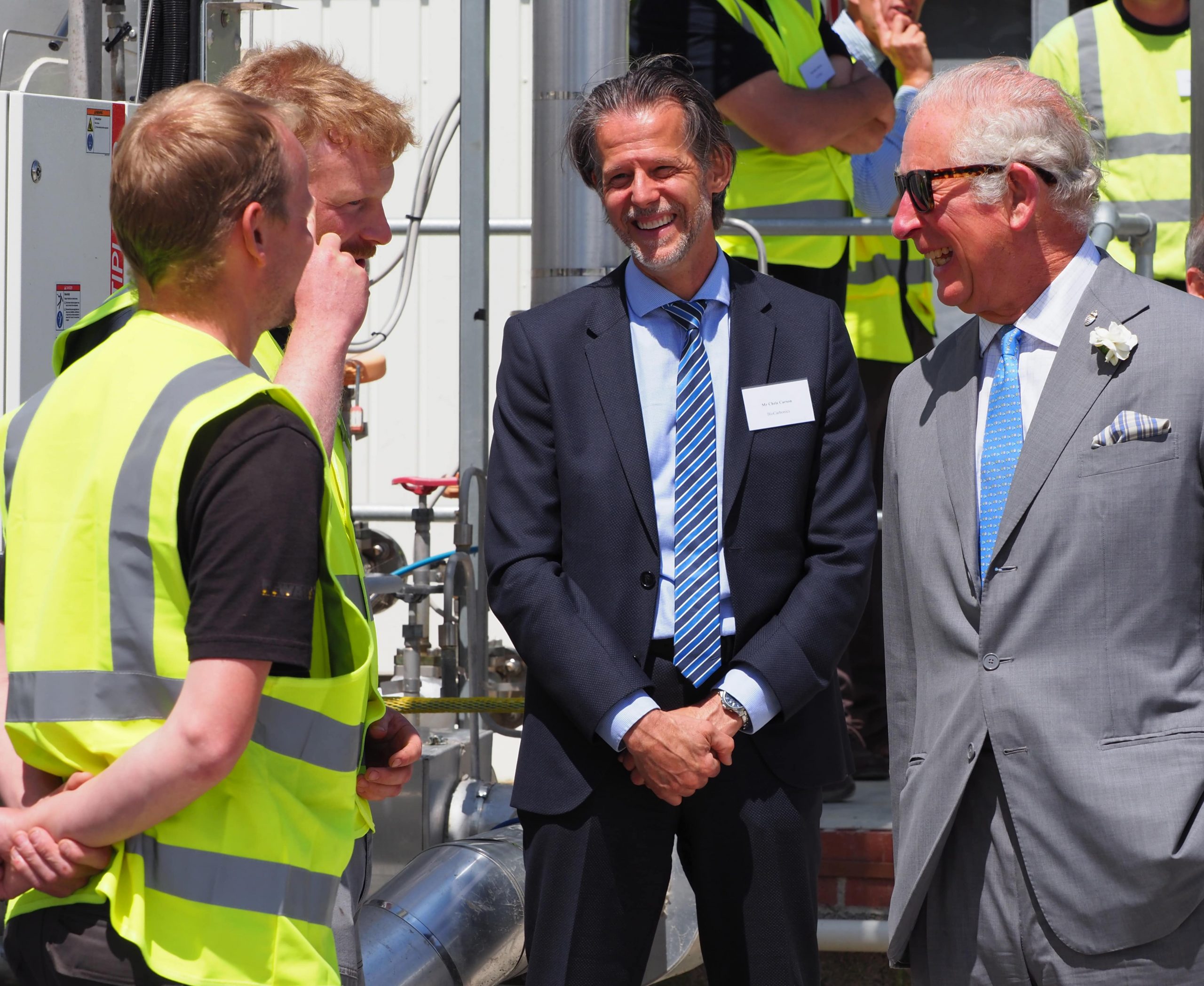 His Royal Highness The Prince of Wales opened J V Energen’s newly installed CO₂ capture facility near the Duchy of Cornwall’s Poundbury development in Dorset last week, where green CO₂ is supplied to their new joint venture business BioCarbonics Ltd, having been captured from a full-scale Anaerobic Digestion (AD) and biomethane-to-grid plant, to produce a clean, sustainably sourced product for use by local businesses.

The CO₂ produced at J V Energen’s Rainbarrow Farm AD plant is processed into a high-quality food and beverage grade product, where it is used for the carbonation of bottled and canned drinks, for distribution to pubs for on-site carbonation of beers, ciders and ales, and in horticulture to stimulate photosynthesis for the increased production of fruits and vegetables, as well as other various applications.

The inaugural opening of this BioCarbonics joint venture green CO₂ facility marks the launch of a pioneering model for the UK’s CO2 industry, where green CO₂ is recovered from a network of renewable energy sources to ensure an improved continuity of supply, with no danger of a repeat of the industry-wide shortages experienced in 2018.

Championed by The Prince of Wales, Rainbarrow Farm AD plant was the UKs first commercial biomethane-to-grid plant, currently generating enough gas to reach 7,500 houses mid-winter and over 100,000 houses in summer, five times the population of Dorchester. Biogas produced at Rainbarrow Farm was first cleaned and injected as biomethane into the national gas network on 11 October 2012.

CO₂ recovery at Rainbarrow Farm currently operates 12-14 hours per day. Plans are in place for this to change to 24/7 production in June, and the facility will produce over 24 lorries loads per month when fully loaded.

“Most of the CO2 used in the UK comes from industrial fossil fuel processes with a historically unreliable continuity of supply. BioCarbonics is changing that by relying on multiple, smaller sources of green CO2, which is recovered from biomethane production, where clean, green feedstocks are being converted into green gas for use in the national gas network to heat local homes and businesses.

“To safeguard against CO2 shortages, Rainbarrow Farm is one of two facilities in BioCarbonics’ growing network. The other facility, located in Herefordshire, has been active since June 2019. Together, these two facilities produce over 40 lorries per month of green liquid CO2.”

As well as the CO₂ being utilised locally, the digestate by-product is used as an organic, peat free, nutrient soil enricher called ‘Bloomin AmazingTM’ , which is bagged as a soil enricher for sale to over 350 garden centres, and helps local farmers significantly reduce reliance on artificial fertilisers.

The management is actively looking to find other AD biomethane to grid producers who are interested in supplying CO₂ to BioCarbonics to help grow this network. BioCarbonics is seeing increased interest from potential customers who recognise the marketing benefits of green CO₂, and who are looking for a local and highly reliable supply of sustainable CO₂.

How can my business reduce energy costs?

How does the future look for the UK’s AD & Biogas sector?