Miscanthus proven to be a carbon sink in new study

The first dedicated independent study into the Miscanthus carbon life cycle shows that the crop is net carbon negative, capturing net 0.64 tonnes of carbon (2.35 tonnes CO2e) per hectare, per year in the soil at the very least.

The study substantiates the two known simultaneous carbon cycles of Miscanthus (see below), where the above ground biomass grows each year and recycles all the carbon that’s been produced through planting, harvesting and burning the crop for renewable electricity, and at the same time, the underground rhizome and decaying leaf litter fixes and stores carbon each year as it grows. 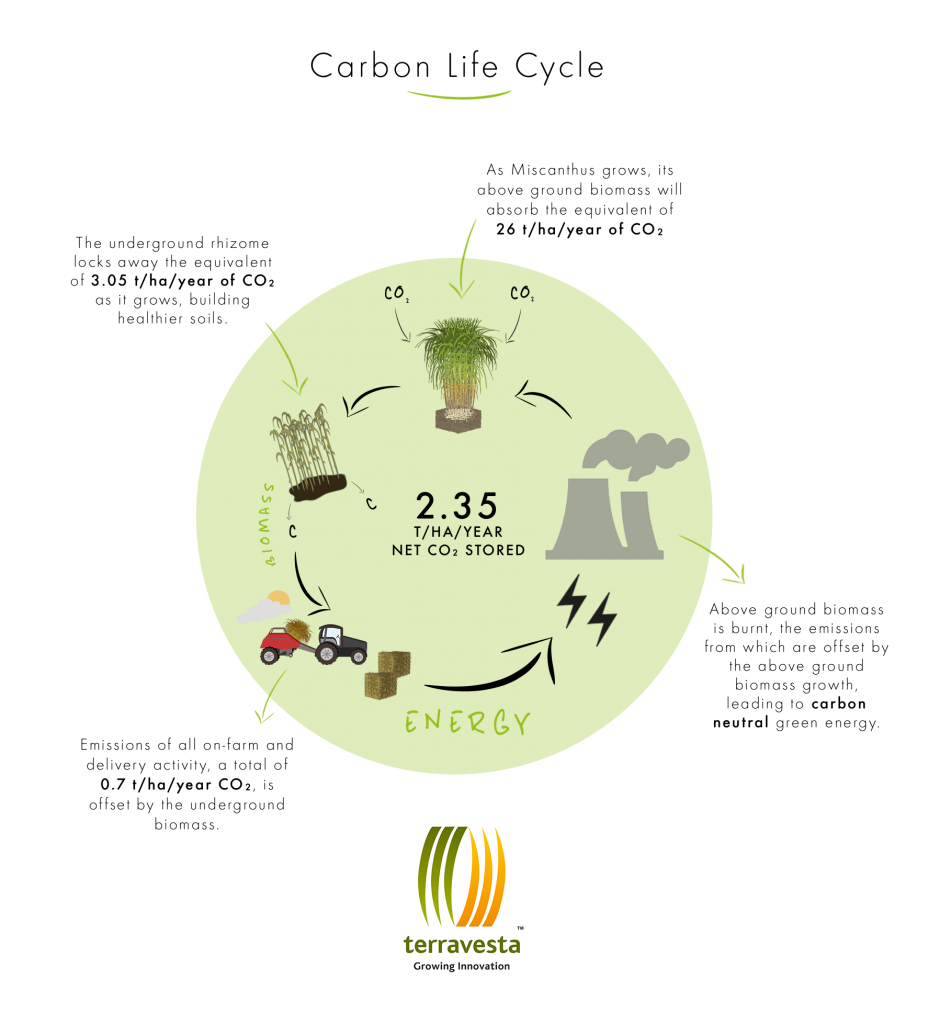 The results are crucial for farmers looking at carbon farming opportunities, and for the rapidly emerging bioeconomy, because there has been a lack of evidence-based research into carbon sequestration capabilities of crops, until now, according to the firm releasing the research, Miscanthus specialist, Terravesta, in collaboration with the University of Honenheim, and the international research project, GRACE (GRowing Advanced industrial Crops on marginal lands for biorEfineries).

The carbon sequestration research was conducted by Jan Lask, from the University of Hohenheim, and the study separately considers the carbon relative to the growing crop in the field, attributable to the land, under net carbon capture, and the carbon associated with the biomass and its uses, under crop Biomass.

“The results are conservative, and in reality, the carbon sequestration potential may be higher, and it will change from site to site,” says Mr Lask.

“We looked at the above ground and below ground carbon life cycles separately, and calculated the carbon stored in the biomass and in the rhizome, and we also measured the Miscanthus leaf litter that decomposes over time and becomes incorporated into the soil, contributing to the soil carbon,” adds Mr Lask.

Miscanthus is already established on over 7,000 hectares of marginal land and counting in the UK, and is thought to have the potential to contribute significantly to the UK’s 2050 net zero target. It’s said to be a scalable solution that’s operational now, beneficial to the environment and profitable for farmers.

“There has been a lack of understanding on how carbon is evaluated, and many unsubstantiated figures used. The need to resolve this will be crucial in delivering the industrial, economic and societal changes needed to build a sustainable future.

“Depending on the use of the biomass, the study indicates that biomass carbon is either stored, through Bioenergy with Carbon Capture Storage (BECCS) or in emerging uses such as building materials, and this carbon storage is in addition to the below ground storage figure of 0.64 tonnes of carbon per hectare per year. Or the carbon is released, via power generation, in which case the use process is carbon neutral, with the released CO2e being reabsorbed by the crop for the next crop. Essentially, the above ground biomass is replacing fossil fuels in its use and recycling the carbon emitted in this process, while the crop is storing additional carbon underground,” says Dr Kam.

“We believe that the carbon element of the Miscanthus supply chain is likely to have high importance to the participants in different contexts, and ‘ownership’ of that carbon will be a critical motivator between potential grower, potential off-taker and all in between,” says Dr Kam.

According to Terravesta science and technology director, Dr Michael Squance, the benefits to farmers growing the crop are ever developing.

“The carbon life cycle figures in this study (see below) are a worst-case scenario and with new uses and markets emerging, the carbon position will only strengthen.“What’s more, Terravesta has developed the Harvest Hub – a new information management system that is helping us to capture more sustainability data for farmers, which will then be used to validate the Miscanthus carbon position,” adds Dr Squance.