Researchers at the University of Cambridge have used a species of blue-green algae to power a microprocessor for over a year, using nothing but ambient light and water. 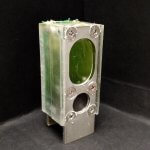 Roughly the size of an AA battery, the device (pictured left) contains a type of non-toxic algae called Synechocystis that naturally harvests energy from the sun through photosynthesis. The small amount of electricity generated then interacts with an aluminium electrode, before being used to power a microprocessor.

The device is made of inexpensive and largely recyclable materials. It is being seen as a reliable and renewable power source, well suited to off-grid or remote locations, and can apparently be replicated to power a considerable number of small devices as part of the ‘Internet of Things’ – a vast and growing network of electronic devices, each using only a small amount of power, that collect and share real-time data via the internet.

“The growing Internet of Things needs an increasing amount of power, and we think this will have to come from systems that can generate energy, rather than simply store it like batteries.

“Our photosynthetic device doesn’t run down the way a battery does because it’s continually using light as the energy source.”

In the experiment the device, an Arm Cortex M0+, was used in a domestic environment under natural light and normal temperatures. The algae present didn’t require feeding, as it created its own food via photosynthesis. Researchers also found that the device could continue producing power in the dark, despite light being an essential component of photosynthesis, as the algae continued to process its’ food without light.

The work was a collaboration between the University of Cambridge and Arm, a company leading the design of microprocessors, funded by the National Biofilms Innovation Centre.