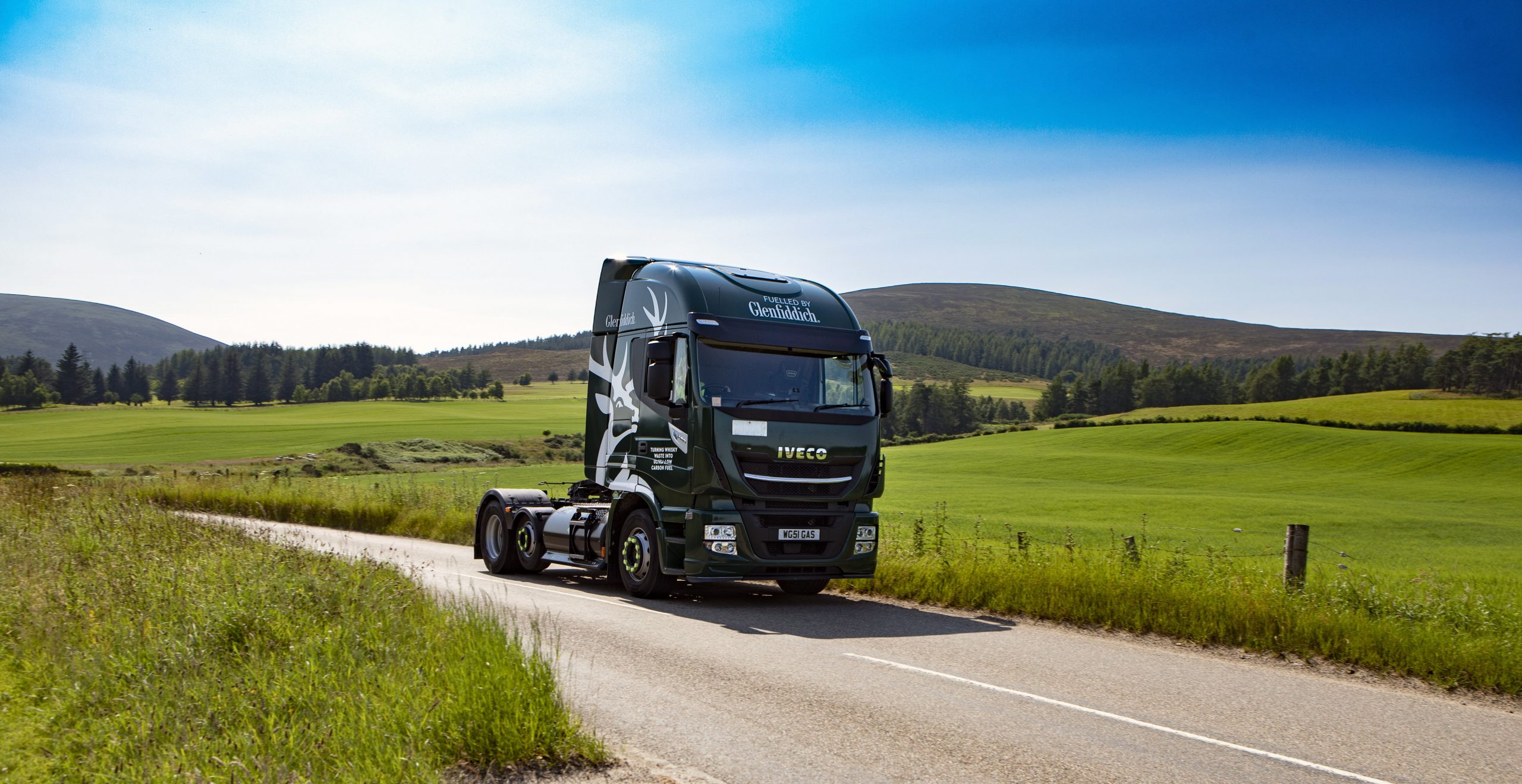 Glenfiddich, the world’s most-awarded single malt Scotch whisky, has launched a pioneering ‘closed loop’ sustainable transport initiative that will make it the first global spirits brand to run its delivery fleet on biogas made from the residues of its own distilling process.

Using a unique technology developed by its parent company William Grant & Sons, the Glenfiddich distillery at Dufftown in north-eastern Scotland converts its production wastes and residues into an Ultra-Low Carbon Fuel (ULCF) gas that produces minimal carbon dioxide and other harmful emissions.

Fuelling stations have been installed at the distillery, and the biogas is now powering specially converted trucks, bearing the statement ‘Fuelled by Glenfiddich – turning whisky waste into Ultra Low Carbon Fuel’, that handle the transportation of the Glenfiddich spirit at all stages of its production at the Dufftown distillery through to bottling and packaging, a journey that covers four William Grant & Sons’ sites in central and western Scotland.

“Glenfiddich is appreciated around the world as a unique single malt whisky, which is the result of generations of pioneering craftsmanship and concern for the long-term sustainability of the spirit.

“Across the entire production lifecycle, the biogas reduces carbon dioxide (CO2e) by over 95% and other harmful particulates and greenhouse gas emissions by up to 99% when compared to diesel and other fossil fuels. Each truck will displace up to 250 tonnes of CO2e annually, which has the same environmental benefit as planting up to 4,000 trees every year – the equivalent of displacing natural gas, a fossil fuel, from 112 households.

“We are proud of these renewable energy breakthroughs in our industry as we scale up the de-carbonising benefits of this closed-loop process across our entire transport fleet.”

“Our consumers have a maverick mindset that encourages us to push boundaries. As a family-owned business we think in the long term, whether our focus is on the sustainable measures we employ at the distillery or on producing the world’s most awarded single malt. Our green biogas transport fleet is absolutely in line with our brand ethos of ‘Where Next’ – always challenging ourselves not to rest on our past achievements but to always look for what is coming next.”

The ‘Fuelled by Glenfiddich’ breakthrough is one of a range of sustainability activities taking place across William Grant & Sons’ wider business in line with the Scotch Whisky Association (SWA)’s roadmap to achieve targets set out under the United Nations’ Sustainable Development Goals, which will be a main focus of the UN COP26 Climate Change Conference in Glasgow this November.