The station, capable of refueling 80 HGVs an hour, is one of fifteen planned by CNG Fuels by the end of the year

By the end of 2021, CNG Fuels will be opening one of the world’s largest biomethane refuellings stations near Bristol, the UK. This station will have the capacity to refuel 80 Heavy Goods vehicles an hour using 14 high-speed dispensers. This refuelling station will cater for vehicles travelling from Inverness to Cornwall.

CNG Fuels plans to open another fifteen by the end of the year to meet the growing demand. A new partnership with Foresights Groups will finance CNG Fuels expansion with £80 million.

Construction began on the Avonmouth station, near the M4/M5 junction, in May 2021 and will serve the busiest freight routes in the UK. The station will provide motorists with access to low-carbon fuel, which will support plans for net zero emission while saving costs.

HGVs contribute over 4.2% of UK carbon emissions (see the CCC’s fifth carbon budget). To achieve UK’s net-zero goal by 2050, it will be essential to decarbonise the sector. By 2025, over 10% of the UK’s high-mileage HGV fleet will be running on Bio-CNG. CNG Fuels also forecast the demand to grow by over 100% yearly. 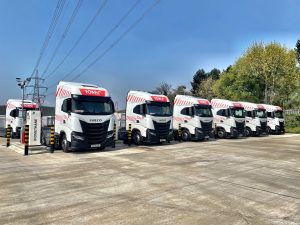 The fuel supplied by CNG Fuels was approved under the Department for Transport’s Renewable Transport Fuel Obligation (RTFO) scheme. Its biomethane is considered 100% renewable and sustainable, with the lowest carbon emissions and 35%-40% cheaper than diesel. It cuts greenhouse gas emissions by 85 – 90%. Currently, CNG Fuels’ biomethane feedstock is sourced from food waste. It will soon be sourced from manure in 2022, making the fuel fully carbon neutral.

Some of the brands that will be using the refuelling station at Avonmouth will include:

He also highlighted that the proximity of CNG Fuels’ refuelling station in Avonmouth would make it accessible to their distribution centres extending the range of low-carbon deliveries they can make across the country.

CEO of CNG Fuels, said their current Avonmouth station is strategically located to allow the firm to supply more fleet and hauliers in that way, reducing the carbon footprint of the transport sector while saving costs. He also said the station is expected to provide routes between London, the Midlands, South Wales, Cornwall and Devon.