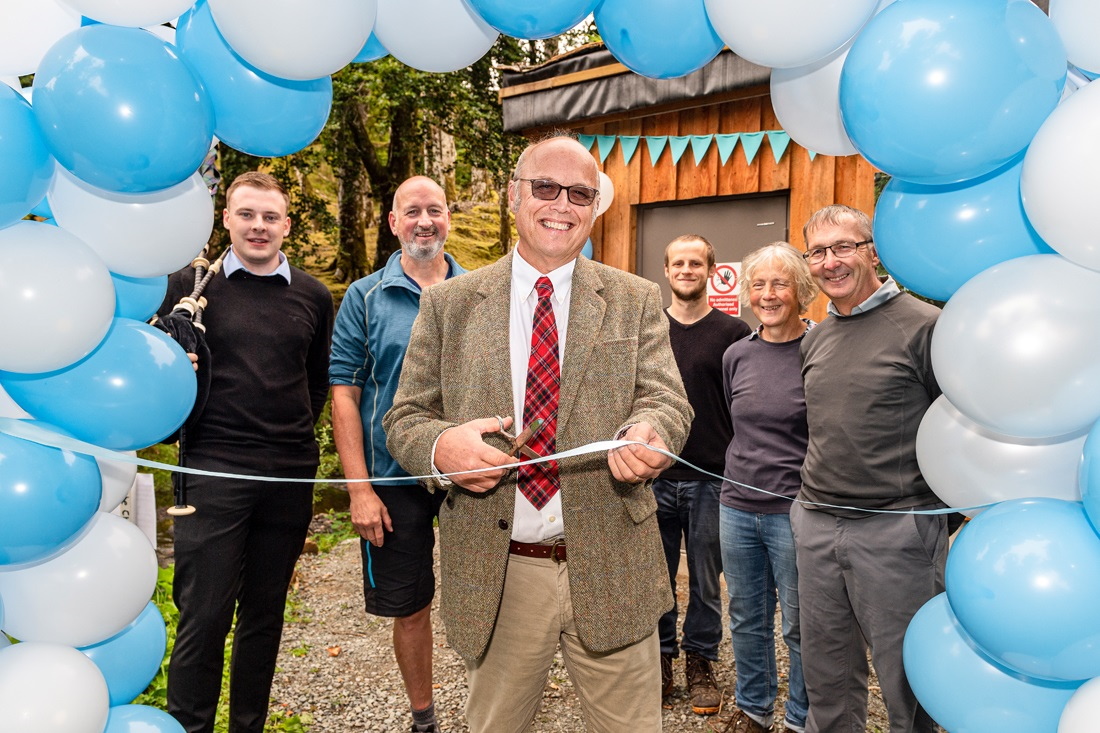 Residents in Skye’s Sleat peninsula are celebrating the official launch of a community project which will see funding flow from a new hydropower project.

The run-of-river hydro scheme, Cumhachd Shlèite, which means Sleat Power in Gaelic, is at Allt a’ Cham-aird in the community-owned Tormore Forest. It is Sleat Hydro Community Benefit Society’s (SHCBC) first project, and is set to bring financial, environmental and social benefits to the local community.

It’s hoped the community-owned 34 kW micro hydropower scheme will generate 148,000 kWh annually, all of which are be sold to the National Grid. Profits will be returned to the community through the Sleat Community Trust.

“Despite the Gàidhealtachd being a huge exporter of renewable energy, we pay the highest prices for electricity with some of the worst rates of fuel poverty in the UK. On Skye we also have issues with young people unable to find secure employment and housing.

“Community-owned renewable energy projects such as this are not just a way to reduce our carbon emissions, they also offer massive potential to create community wealth that can help to address some of these underlying issues. And what we achieved here, will also give a lot of our confidence to other communities on Skye.

“I think that Cumhachd Shlèite has demonstrated the strength of community action and its ability to lead the way in community wealth building. There will be more developments in renewable energy like this in the coming years, so I hope that we have proved how our communities are able to retain all the benefits that such initiatives bring.”

The project was funded through a community share offer which was launched last December to raise the full £235,000 required to build the scheme. There was huge local support, with over £200,000 coming from the Skye and Lochalsh area, and £155,000 of that from Sleat residents.

“Community support and local investment lie at the heart of the scheme’s success. It’s fantastic to see it up and running. Thanks go to our community benefit society board, to our project officer Kenny, and to construction partners JB Hydro who completed the build phase ahead of schedule.”

Everyone who has invested has become a member of the society, with equal voting rights and each will receive interest payments on their investment from 2023. The hydropower project also received funding through the Local Energy Scotland CARES grant plus development support and a micro grant from Community Shares Scotland.

“Sleat Hydro Community Benefit Society is the tenth community-owned hydro scheme supported by Community Shares Scotland. These hydro projects have raised over £5 million through community shares – empowering communities to foster a sustainable future and demonstrating the many benefits of community ownership.”

The community is featuring as a #netzerohero in Highlands and Islands Enterprise’s #netzeroscotland campaign, and part of this week’s Scotland’s Climate Week (13-19 September). www.hie.co.uk/CumhachdShlèite